Tonight I hosted the Devapalooza event for Visual Studio Live in Redmond.  For the event, we played a Jeopardy-like game using software and hardware I created.  You can find an article on how the software was created, how to build the hardware, and full source/binary downloads over at Coding4Fun and CodePlex  This can be a fun way to host training at your office, or a way to liven up a user group.

A huge thanks to Dan Waters and Clemens Vasters from Microsoft, VSLive speakers Rocky Lhotka, Deborah Kurata, and David Platt, and our three attendees who played the game.  I think it was a great time.  Hopefully you did too if you were in attendance.

After playing the game tonight for real, I have a few ways to fix up the software and make it a bit easier to use, especially on the scoring side.  Also note that the code isn’t the best example of great coding.  With this being a side project and the deadline looming, I took a few dirty shortcuts.  But, it got the job done.  It looks like we might be playing this again at Visual Studio Live Orlando in November, so I should have those changes posted to Coding4Fun/CodePlex before then.

We had a few arguments over questions and answers tonight with the ultimate argument taking place during Final Jeopardy.  The category was “.NET History” with the following clue:  Prior to being known as the Common Language Runtime, the CLR was known by this “flashy” moniker.  The two answers that were given that caused a stir were  “Universal Runtime (URT)” and “COM+”.  The official answer I wrote was “Project Lightning”.  Carl Franklin of .NET Rocks fame did an interview with Jay Roxe back in 2005 in which he explained a bit of history of .NET.  Jay, a member of the early team, says this in the interview: “I joined what is now the .NET Framework team, or the Common Language Runtime team, back in November of 1997. [This was] back when it was called Project Lightning, then it became COM+, then it became Project 42….”  Wikipedia lists all of these names, along with Common Object Runtime (COR) and Universal Runtime (URT).

So…do I have any insiders reading the blog that were part of the original team have a timeline on the naming of the CLR?  Only Project Lightning fits the clue of “flashy” moniker, and the interview does indeed claim COM+ was a later name, but an official timeline of names would be interesting to know, especially if URT preceded Lightning.

Tomorrow I’ll be presenting my Multi-touch Madness session and I will post slides and code by Friday.

Update: Here’s a video of the Final Jeopardy argument, thanks to John von Rosen. 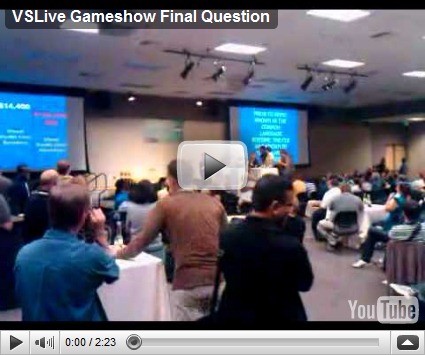