Another PDC is over and I’m happily relaxing before work starts again on Monday.  Lots of announcements, free laptops for attendees (not me, sadly), and plenty of time spent in our Coding4Fun area with my project.  We even had the opportunity to take part in a live broadcast on Channel 9!  The recording for that show should be available shortly.

We had 5 fantastic projects in the Coding4Fun area this year:

And what was my big project this year?  A fun little game titled Mind Blaster, a space shoot ‘em up game played entirely with your head! 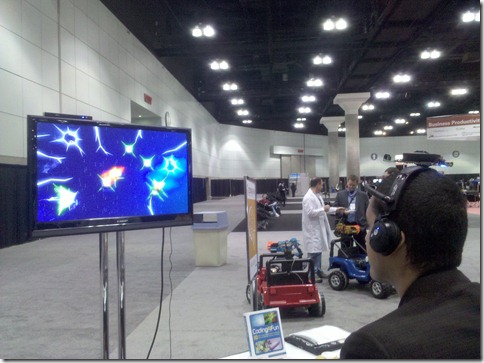 How does one do that? Well…

This past July I found a brain-wave sensing headset from Neurosky called the MindSet.  They are now shipping headsets at $200 each and provide a free set of development tools to use the headset in your own apps.  Part of this toolkit provides support for using the headset in .NET using C#.  This headset uses 4 dry sensors to measure alpha, beta, theta and gamma waves produced by your brain, runs them through a proprietary algorithm they’ve developed, and scores your concentration/focus and relaxation individually on a scale from 1 to 100.

The second piece of hardware involved is a Nintendo Wiimote, gutted and strapped to the top of the headset.  With an IR bar on the top of the monitor, this provides full head-tracking in 2 dimensions.  Interfacing to this device is quite easy using my managed library which you may have heard of…

With these two things strapped to the user’s head, the game, written using XNA, takes shape.  Move your head to move a targeting reticule around the screen.  Hover the reticule over an enemy, then begin focusing your attention on that enemy.  The harder you think and the more you concentrate, the faster the enemies heat up and then explode.  Enemies will shoot back, and you can target their missiles to blow them up before they hit the screen.  Here’s a short video of the game in action.

A simple but fun little game.  I even had several people come back multiple times during PDC to attempt to better their score.

I owe a lot of people a huge amount of credit for bringing all of this to life….

There will be much more to come on this game over the coming weeks.  I will be doing an extensive article on Coding4Fun detailing how the game was created.  At that time, the full source code will also be released.  I will probably also write up a short post-mortem on the creation and exhibition of the game in the style of those seen in Game Developer magazine.